As our informed readership, many of you are aware that mobile banking is on the rise in Europe. Where in 2017 only 48% of Europeans used their smartphone to bank, in 2018 this number jumped to 61% (1). In places like the digitally savvy Nordic states, we see that mobile banking is experiencing an especially rapid uptake. As a result, announcements of ever mightier funding rounds for mobile challenger banks are surfacing by the week and show no signs of slowing down.

The skyrocketing customer-acquisition rates and growing financial muscle demonstrated by some of these mobile challengers are compelling European incumbents to react and develop their own mobile offerings in order to retain market share. 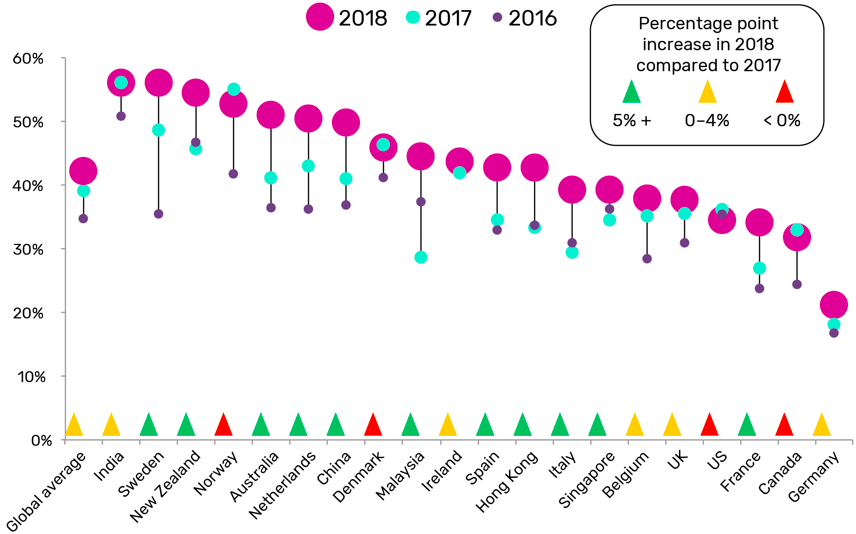 The European mobile banking boom has not gone unnoticed: innovative incumbents from outside the EU are starting to queue up to join the party and grab a piece of the pie. The only thing holding them back are the EU’s existing regulatory entry barriers. However, with banking as a service reaching maturity, these barriers may well soon be a problem of the past.

So, why the hype around mobile banking?

Be it entertainment (Netflix, Spotify), shopping (Amazon) or transport (uber), modern consumers expect their daily services to be on-demand, mobile and have a sleek user interface. Banking services are no exception here. The first “Digital Natives” are now reaching the age where they are managing their own finances. Thus, there is a lot to win for European incumbents if they manage to capture this generation’s needs (and a lot to lose for those who don’t).

However, there is competition from abroad.

Non-EU incumbents have also set their sights on capitalizing on the shift to mobile banking. In many non-EU states, mobile banking is already far more advanced. In Turkey for instance, 80% of smartphone users have used mobile banking services before, compared to just under 40% in Germany (3). Banks from outside the EU are now growing more interested in breaking into the EU market to benefit from the surging mobile demand. In light of this background, Albaraka Türk, the Turkish arm of Islamic-banking giant Albaraka, assessed entering the EU market in 2018 to tap into the largely untouched financial needs of the 27 million muslims residing in the EU.

But it is far from easy for Albaraka Türk to set up shop in the EU.

Banks already incorporated in the EU benefit from the so called “passporting system”. This allows any bank established in a member state to offer its services in all other member states with a single authorization: its “passport”. To obtain these passporting rights, Albaraka Türk would be forced to incorporate a bank in an EU member-state and apply for its own banking license. This process would be incredibly resource intensive and could take up to several years to complete.

So how did Albaraka Türk overcome this challenge?

By partnering with solarisBank, Albaraka Türk was able to bring “insha” onto the market after only six months: an ultra-modern mobile banking app complete with with real time updates on transactions, an entirely digital video identification service and a branded contactless debit card that comes with push notifications and a customizable pin.

How did the partnership work? Introducing Banking as a Service:

As a tech company with a banking license, solarisBank enabled Albaraka Türk to offer digital banking services without needing to apply for their own license. On its “Banking as a Service platform”, solarisBank offers all core digital banking services, from accounts to transactions to identification processes, as modular white-label services that are integrated directly into the insha app via API. And since solarisBank is incorporated in Berlin, it can access the entire EU market using its passporting rights, opening Europe’s doors to Albaraka Türk with just one partnership.

This way Albaraka Türk could develop insha with minimal investment: no need to create a subsidiary, no need to apply for a banking license, and no need to build core banking services in line with foreign regulation. The flexibility of solarisBank’s APIs allowed Albaraka Türk to tailor their app to their target group, including identification solutions for Turks residing in the EU and digital money remittance services.

What does this mean for the future development of mobile banking in Europe?

As Banking as a Service proliferates, more incumbents — both from within and from outside the EU — will jump on the chance to participate in the mobile banking boom. What will also be of great interest is the fate of British banks in the wake of Brexit, specifically in relation to their passporting rights. Whatever happens, one thing is clear: the influx of new mobile players will create a richer and more diverse financial landscape with lower banking fees and better quality for consumers.

Want to find out more about how we are enabling mobile banks in Europe? Come visit our website!

Further stories from our blog

Interview with Alexis Hamel: Forbes 30 under 30 in Finance

Stay tuned
Thank you for your subscription! Please check your email to confirm your registration. × Close
×

Thank you for your subscription! Please check your email to confirm your registration. × Close